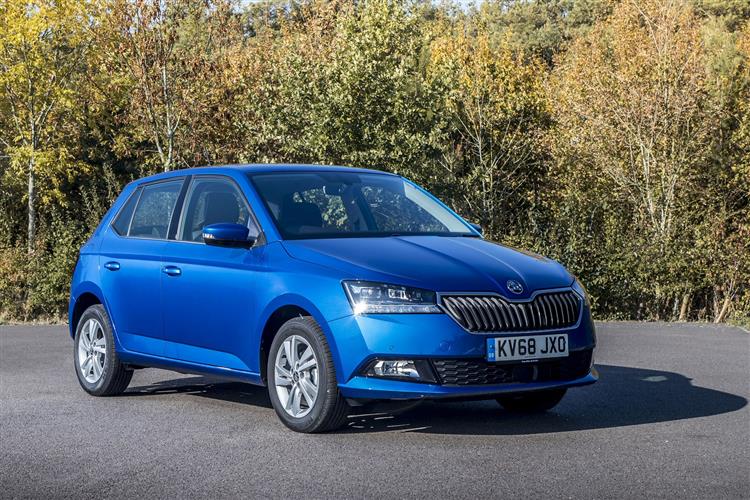 In 2018, Skoda improved its MK3 'NJ'-series Fabia supermini as part of its efforts to keep up with front-running designs in the supermini segment. There were smarter looks and sharp pricing, plus this Czech contender gave nothing away to its rivals in terms of safety and media connectivity. How does this later MK3 Fabia stack up as a used buy?

It may no longer actively campaign as a budget buy, but Skoda's Fabia has always been the thinking person's value-focused supermini. By 2018, around 4.2 million examples of this model had been sold since its original launch at the turn of the century and it's always aimed to give its customers more for their money - as did the third generation 'NJ'-series version in the much improved form we're going to look at here. The Fabia was the car that brought credibility to Skoda. This model's Favorit '90's predecessor had been the first design the brand had produced under Volkswagen Group ownership, but it was the first '6Y'-series MK1 Fabia that showed us just what this could mean. It redefined just how large a supermini could be, with a spacious interior pretty much as big inside as some older family hatchbacks from the next class up. Every small car maker had to match it and superminis quickly became so big that the market rather hurriedly created a smaller Citycar segment below them. The Fabia had proved to be a very significant car. The second generation '5J'-series design of 2007 added a bit of extra style to the Fabia recipe and even spawned a successful World Rally Car. And the original version of the car we're testing here, the 'NJ'-series third generation model of 2014, re-emphasised the traditional Fabia value proposition. Like its predecessors, it was available from the start in both hatch and estate forms. And also like its predecessors, it claimed to be one of the most spacious superminis in the segment - and was at launch. By 2018 though, this model had been somewhat overtaken in that regard by several class rivals, amongst them all-new versions of its Volkswagen Group cousins, the Volkswagen Polo and the SEAT Ibiza, both of which used a much newer MQB-A0 platform that this generation Fabia couldn't have. So what could it offer to deal not only with tougher segment competition but also a fresh wave of supermini-based SUVs like Skoda's own Scala model? The mid-term facelift package we're going to analyse here tried to answer that question. The strong value proposition we've already alluded to looked even better when you took account of this car's much improved standard equipment levels, which by 2018 included 'Front Assist' autonomous braking and a smart 6.5-inch infotainment touchscreen across the range, along with a useful package of Skoda's famous 'Simply Clever' features that added day-to-day usability. There was also smarter styling and efficiency improvements across an engine line-up that by 2018 was exclusively devoted to 1.0-litre three cylinder petrol power. In this form, the MK3 'NJ'-series Fabia sold until 2021, when it was replaced by a fourth generation design.

In its original form, this third generation 'NJ'-series Fabia aimed to user in a fresh era in Skoda design. It's a look that in 2018 was smartly updated by Karl Neuhold, the brand's then Head of Design, for this facelifted model. As part of that facelift, the smarter front end was distinguished by a crisply-contoured bonnet that flowed down into a wider grille with vertical slats framed either in chrome or black. It's flanked by headlamps that featured more intricate detailing - apparently a visual tribute to the Czech Republic's cut crystal glass heritage. These lights could be ordered with optional full-LED beams and LED daytime running lights were by now standard fit across the range. Inside up front, this improved MK3 Fabia gained brush-effect dashboard trim and contrast stitching on the door armrests; the straightforward models got better quality seat fabrics; buyers could specify a centre front armrest; and top variants got illumination for the centre console compartment so that owners could more easily find things like house keys in the dark. The key change though lay in the centre of the dashboard with an upgraded level of infotainment. The previous 5-inch screen was now replaced by a smarter glass-fronted 6.5-inch monitor, fitted as standard across the range. If you get a Fabia whose original owner went for the optional higher-grade 'Amundsen' package that included navigation and Wi-Fi, you can then really get into the advanced connectivity that Skoda offers through its optional 'Infotainment Online' package. In the rear, head room is unbettered in the class from this period and in terms of footwell space, it's just about possible for one six foot adult to sit behind another, though in such a situation, the rear person's knees would be rather buried in the front seat backs. Out back, there's a big (for a supermini) 330-litre boot (it's 530-litres in the Estate version).

What to Look For

In our ownership survey, we struggled to find many people who didn't like their Fabia. We found one owner who complained that his handbrake kept sticking on - but that was about it. It's just necessary to look out for the usual supermini issues - kerbed alloys and evidence of damage from unruly children on the interior plastics. Obviously, you'll want a fully stamped-up service history. We've come across reported issues with the optional 7-speed DSG automatic gearbox, which can be very jerky when shifting: look out for this on your test drive. There have also been some reported issues with the Mirrorlink aspect of the infotainment system, so make sure that the screen pairs properly to your smart phone. Customer surveys suggest that this Fabia wears its brakes, tyres, windscreen wipers and headlamp bulbs less than most class rivals.

By 2018, Skoda couldn't see the point in offering this MK3 Fabia with anything other than 1.0-litre three cylinder petrol power - which is, after all, the optimum configuration for a small car of this kind these days. The range kicked off with the 75PS normally aspirated MPI unit borrowed from the brand's smaller Citigo model, but we'd strongly encourage you to find the relatively small increment necessary to upgrade yourself to the far preferable turbo TSI version of this engine, which by the end of MK3 Fabia production was the only unit offered. This powerplant gives you nearly 60% more pulling power through the gears and comes in both 95PS and 110PS guises, the latter available with a 7-speed DSG auto gearbox. Most buyers will stick with a manual - a 6-speeder on the 110PS variant but offered with only five ratios if you opt for either of the other two available engines. Under the skin, this Czech contender uses older underpinnings than those you'll find in its VW Group SEAT Ibiza and Volkswagen Polo supermini cousins. That makes a difference when it comes to potholes, speed humps and abrupt changes of direction, all of which trouble a Fabia more than they would a Polo or an Ibiza from the 2018-2021 period. Most of the time though, you won't notice much difference. This Skoda's ride quality is set-up to prioritise comfort and it deals with normal tarmac tears quite adeptly and works well for highway cruising. Plus the Fabia impresses when it comes to low speed manoeuvrability, its light steering, tight turning circle and great all-round visibility making town travel easy. It's pretty frugal too: even this perkiest 110PS 1.0-litre TSI model manages 60.1mpg on the combined cycle and 107g/km of CO2 (both NEDC figures).

So. How to sum up? Does it matter that the Fabia isn't as technologically new as other VW Group superminis from the 2018-2021 period? Probably not. We can't imagine the average buyer really cares what platform their small car rides on, though this Skoda's more elderly underpinnings are slightly betrayed by ride quality on poorer surfaces and the fact that its Volkswagen Group cousins from this period can offer more boot space. True, there are certainly more stylish and sharper-handling cars you could choose in this class - but most of them will cost you quite a lot more. If instead, you focus on the things you're actually going to most need in a supermini of this kind - ease of use, low running costs, practicality - it becomes clear that the MK3 Fabia in this post-2018 form can emphatically tick a lot of those boxes. It's a car in this class that you can't ignore if you're looking at a supermini made in the 2018-2021 period. It may not be the small runabout you'd ideally dreamed of owning. But it could very well be the one you actually need.