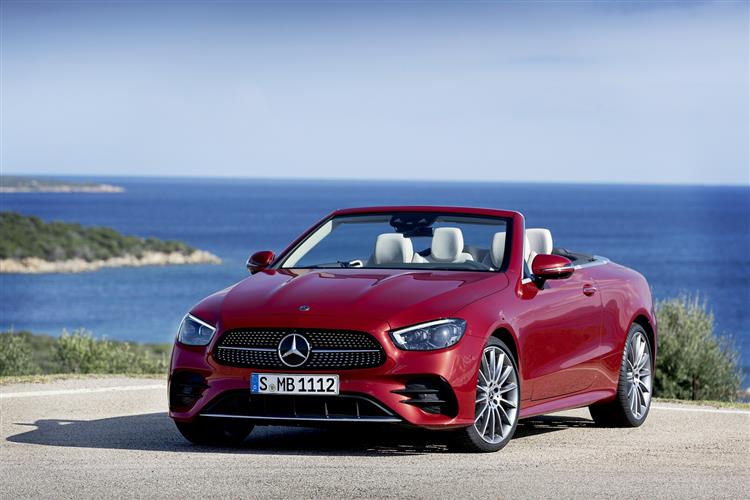 In its latest form, the Mercedes-Benz E-Class Cabriolet has an exotic feel, thinks Jonathan Crouch

On paper, a Mercedes might directly compete against products of other premium brands. Traditionally in the metal though, the aim has always been for the Three-Pointed Star to feel a class above. It isn't always the case, but one good example that springs to mind is this car, the Stuttgart brand's E-Class Cabriolet. It's primarily based on the striking Coupe variant and shares much the same engineering and drive characteristics. On paper, it's a direct rival for more expensive versions of drop-top BMW 4 Series or Audi A5 models. But live with one and the feeling you get is more of something that's an acceptable halfway house between cars like these and the kind of Bentley you'd really rather have. With this time round, the appeal is strengthened by sharper looks, a most sophisticated cabin and extra mild hybrid tech.

Mercedes says that with this generation E-Class Cabriolet, it's worked hard to inject what it calls a little more 'luxurious, sporty character' into the car. Hence the current E-Class platform's wide track and slightly lowered suspension - and the car's standard 'DYNAMIC SELECT' driving modes system. All of which has certainly made a difference, but not enough of one to essentially alter the character of this car; it's still more of a boulevard cruiser than a B-road blaster. Which is exactly as it should be. At speed through tight turns, there's still more body lean than you'd find with some premium rivals and the steering still isn't very talkative when it comes to communicating much about what the wheels beneath you are doing. Push through that though and you'll find surprisingly high levels of grip, traction and balance and through fast, flowing corners, this car has as fine a chassis balance as you could wish for. As you'd expect, this E-Class Cabriolet shares its engineware with the E-Class saloon, which means now more extensive use of the brand's mild hybrid 48V electrified technology. This features an Integrated Starter Generator, which uses an electric alternator fitted directly to the nine-speed automatic gearbox. This tech now features on the top version of the brand's 2.0-litre diesel unit (in the E 400d) and in the in-line six cylinder petrol engine of a fresh variant, the E 450. Either way, this mild hybrid set-up offers an electric boost of up to 20bhp in certain situations. Across the range, the engine line-up offers two diesels and three petrol units at launch, varying between 2.0 and 3.0 litres in capacity and producing between 192bhp and 362bhp. There's also a top Mercedes-AMG E 53 variant which uses a 429bhp twin turbocharged 3.0-litre six cylinder petrol engine with 4MATIC 4WD.

When the soft top is up, the E-Class Cabriolet has a silhouette similar to that of the E-Class Coupe. And it shares the latest changes made to that model. So there are flatter full-LED headlamps which sit either side of a re-styled 'A-shape' radiator grille which features chrome-plated dots, a single louvre and the Mercedes star in the centre. The fabric soft top is available in dark brown, dark blue, dark red or black. More importantly, it can be fully opened and closed in 20 seconds when travelling at a speed of up to 31mph and buyers can specify the AIRCAP electric draught-stop system and the AIRSCARF neck-level heating system. The roof's multi-layered structure with sophisticated insulation reduces wind and driving noise, which makes it easy for the occupants to hear each other talk, even when driving at high speed. The soft-top structure is equally effective when it comes to climate comfort, making the Cabriolet suitable for use all year round. After opening, it folds down into a bespoke compartment in the boot and a retractable cover separates the soft top from the remaining boot space. The boot capacity of 385-litres (310-litres when the roof is open) means the E-Class Cabriolet doesn't compromise too much on practicality. Plus 50:50 folding rear seat backrests create a through-loading feature for longer items. Up front, there's a smarter steering wheel and a pair of 10.25-inch screens are now standard, one for in infotainment and one of the instruments (upgradable to 12.3-inches in size further up the range or at extra cost). These monitors now work with the brand's latest MBUX interface, which means that you get far more sophisticated "Hey Mercedes" voice control and a lower touch-sensitive pad to replace the previous click wheel controller.

As before, E-Class Cabriolets will be sold in the £50,000 to £70,000 bracket. Before finally deciding, you might want to compare this model's value proposition with Mercedes' only slightly smaller C-Class Cabriolet: after all the two cars are virtually the same underneath. That's hard to do very accurately since a number of different engines are used in the two model line-ups. Both these Mercs do however, share the same four cylinder diesel engine: go for this and there'll be a likely premium around £12,500 to go from a C-Class Cabriolet to an E-Class Cabriolet. We can see many buyers being quite happy to pay that. There's a kind of 'junior Bentley' feel about this car that gives it a more up-market feel than you'd get in any C-Class. Yet the outlay needed for ownership shouldn't require too many potential owners to need a lottery win first. With this revised model, there's an optional 'Urban Guard' theft protection pack. And numerous upholstery material combinations are available, ranging from fabric to ARTICO man-made leather, embossed leather and nappa leather with diamond quilting. You're probably going to want the upgrade to the larger 12.3-inch infotainment screens. And possibly also to the ENERGIZING comfort control set-up, which networks various comfort systems in the vehicle, and uses musical and lighting moods plus a number of massage modes to meet a wide range of individual requirements with respect to the occupants' wellbeing.

Many E-Class engines are now embellished with a bit of mild hybrid tech which sees an EQ Boost starter-alternator motor mounted on the 9-speed auto gearbox. It's a key component of the 48-Volt on-board electrical system. The mild hybrid system adds another 16kW (or around 20hp) of boost to the total power output and 250Nm of extra torque and has been designed for maximum energy recuperation and the virtually imperceptible restarting of the engine with the start/stop function. There's also a gliding mode that disconnects the engine from the gearbox at a cruise. This powertrain also incorporates an exhaust gas after-treatment system mounted near the engine and a standard-fit particulate filter, the only part of the exhaust system that's under the floor. You shouldn't get your hopes up too much for the difference all this will make; the WLTP combined cycle fuel reading for the E 220d Cabriolet is around 50mpg and the WLTP-rated CO2 return is up to 131g/km. Even the top E 450 4MATIC petrol Cabriolet variant manages around 30mpg and up to 184g/km. Another thing we'll need to tell you is that the comprehensive three year unlimited mileage warranty is built upon by Mercedes' Mobilo scheme which delivers breakdown cover for up to thirty years, as long as you continue to have your car serviced at a Mercedes main dealer. And it's worth knowing that your maintenance outlay can be kept a little in check by going for the optional Service Care package that takes care of routine maintenance, spreading the cost of regular servicing, guaranteeing the price of parts and labour for up to four services and covering the cost of all recommended service items such as brake fluid, spark plugs, air filters, fuel filters and screen wash.

Assuming that it's not lashing down with rain, here is a convertible you can use for roof-down motoring almost whenever you want. It can be cold or windy. Your journey may be at high speed. Or it may include rear seat passengers. Either way, it matters not. In few other five-figure soft-top will you find yourself retracting the hood quite so often. And that's the beauty of this car. It isn't the sharpest steer in its class. Nor is it the most lavishly equipped or the most affordable to buy. But it's the best at being all the things that typical executive cabriolet owners want their cars to be. And yes, it feels a class above its rivals, just as a Mercedes-Benz always should.