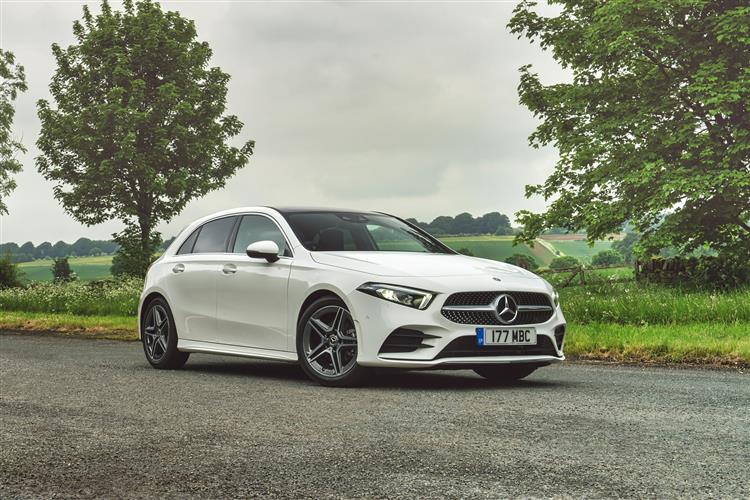 This deal is a stock offer. The specification for this vehicle has been pre-selected.

The Mercedes-Benz A-Class has traditionally sold to a high proportion of female motorists. But will this improved third generation version have as strong an appeal to the fairer sex? June Neary decides

Will It Suit Me?

Early generation versions of the Mercedes A-class offered the small 'Benz model that admirers of the brand had been waiting for. Prior to the arrival of this car, you had to stretch up to a C or an E-Class you get yourself ownership of something with the coveted Three-Pointed-Star upon the bonnet. First and second generation A-Class models proved to be a quiet success, especially with female buyers and small families, progress built upon by the third generation A-Class that launched in 2012. Now we've a fourth generation model, a car I tried recently and one that gets a smarter look and greater efficiency.

Does this dinky Mercedes still suit the female motorist? Certainly, I liked the looks at first glance. Someone has thought long and hard about this car. The first time you climb into one, you'll be astonished at the way that the A-Class manages to pack so much into such a small exterior length. Its dimensions are similar to a regular Focus-sized family hatch and there's almost as much front and rear passenger space in this five-door-only design as you'll find in Mercedes' C-class saloon, plus a decent 370-litre luggage bay. One of the things I really noticed about this fourth generation model was the vastly upgraded interior. The usual instrument binnacle cowl has been completely dispensed with, so the wing-shaped main body of the dashboard can extend from one front door to the other with no visual discontinuity. A virtual instrument screen (of either 7-inches or 10.25-inches in size) replaces the usual dials and can be joined with a centre-dash infotainment display (again either 7-inches or 10.25-inches in size) to create one continuous monitor, much as you get in larger Mercedes models. As our Road Test Editor recently said, about the best compliment you can pay this car is that it now actually feels much more like a Mercedes.

Ride quality was always an issue in MK3 model A-Class derivatives. Here, it's much better and at extra cost, adjustable damping can be added in. The brand's 'DYNAMIC SELECT' driving modes system is standard, as usual enabling you to tweak steering feel and throttle response. Some of the autonomous driving capability from larger Mercedes models has been built into this one, meaning that, in certain situations, you're a-Class, if appropriately equipped, will effectively be able to drive itself on dual carriageways at cruising speeds. On to engines. The entry-level A200 variant is likely to be most popular featuring a new 1.4-litre 163hp unit available with either 6-speed manual or 7G-DCT dual-clutch auto transmission. Rest to 62mph in the manual model takes 8.2s. Next up is the A220 with a 190hp 2.0-litre engine and is the only derivative to offer a 4MATIC 4WD option. That variant sits just below the A250, which uses that 2.0-litre petrol powerplant in a 224hp state of tune. Rest to 62mph here takes 6.2s. Both the A220 and the A250 are only offered with a 7G-DCT auto 'box. At the top of the range is the 2.0-litre hot hatch Mercedes-AMG A35 4MATIC which offers a potent 306hp. There are three diesel alternatives, all offered only as automatics. The first is the A180d, which puts out 116hp and uses the 7G-DCT auto gearbox. Next up is the A200d which has a 2.0-litre 150hp engine. Beyond that lies the top A220d, which tunes the same unit up to 190hp. The A200d and A220 use an 8G-DCT auto.

The A-class isn't cheap - but which Mercedes is? Prices start from around £26,000, but you can easily spend over £30,000 on one of these cars. So yes, it's pricier than that mainstream family hatchback you were considering - but you should get much of the difference back in better residual values at trade-in time.

Could I Live With One?

Certainly - if I could afford the car to start with. The A-class is still a classier way to buy into a compact car. I rather like it.