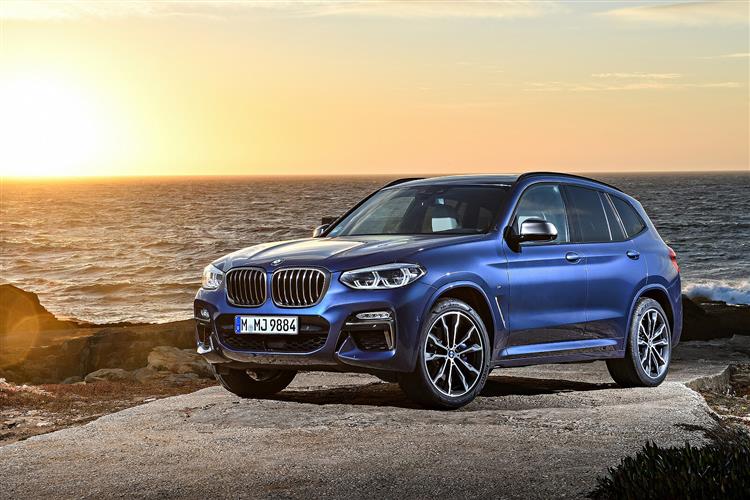 The third generation BMW X3 has been significantly improved. Jonathan Crouch takes a look at what's on offer.

You wouldn't would you? Dramatically change a car that's already a best seller. So the improved version of this third generation BMW X3, the Munich maker's entrant in the ever-growing premium mid-sized SUV segment, very much emphasises evolution over revolution when it comes to the alterations made. This 'G01'-series design was originally launched at the end of 2017, like its predecessor built at BMW's US plant in Spartenburg, South Carolina and styled by Australian Calvin Luk. With this revised model, cabin quality takes a big leap forward. And there's also a properly potent 'M Competition' petrol flagship variant for the first time equipped to take the fight to road-burning rivals like the Mercedes-AMG GLC 63 4MATIC+. Which is just one of a wide range of powerplants for this model line that these days includes both PHEV and all-electric options.

You might think that sandwiched between the X1 and the X5, the X3 wouldn't have to spread its talents too broadly, but such is the span of rivals of this size that this improved version of the third generation X3 needs now to cater for quite different customer expectations in the mid-sized luxury SUV segment. If those expectations extend towards a dynamic driving experience, then the X3 comes well prepared. With ideal 50:50 weight distribution, a finely honed chassis and standard xDrive intelligent all-wheel-drive, linked to Dynamic Stability Control, this SUV proudly shows off the handling characteristics for which the Munich maker is renowned. As for engines, well as before, most buyers will choose a diesel, probably the 190hp 2.0-litre xDrive 20d variant. There's also a 286hp straight-six xDrive30d diesel derivative. BMW thinks that petrol power will get more of a take-up going forward, so is offering an entry-level xDrive 20i version with 184hp, plus there's a range-topping 360hp X3 M40i variant to take on rivals like Audi's SQ5. The Bavarians has also now added an even faster X3 M Competition six cylinder petrol high performance model to the line-up, with 510hp on tap. If you'd like your X3 electrified, there are two options. The xDrive30e variant is a Plug-in hybrid, with 252hp from a 2.0-litre petrol engine mated to a 12.0kWh lithium-ion battery and an all-electric driving range of up to 34 miles. The all-electric iX3 uses an 80kWh battery and offers a 285 mile driving range.

This updated version of the third generation model gains a smarter look, courtesy of a larger front kidney grille with a single-piece frame. It's flanked by now-flatter headlights that now have standard LED beams and there's a revised front bumper with vertical air intakes; and a re-styled lower apron. The rear tail lamps are revised too, now of the full-LED sort, sitting above flush-fitting tailpipe trims. With a drag coefficient of 0.29Cd, the X3 boasts the slipperiest silhouette in its segment. And a 'Digital Key' system's now optionally available so that if you wish, you can unlock or lock the car with your smartphone. Inside, the twin-screened 'BMW Live Cockpit Professional' set-up is now standard. That brings a 12.3-inch instrument binnacle display and the 'BMW Intelligent Personal Assistant', a voice control system responding to the command 'Hey BMW'. 'Apple CarPlay'/'Android Auto' smartphone-mirroring is now (at last) standard. And the infotainment set-up now updates itself with 'over-the-air' upgrades, so you'll get into your X3 one morning and find it able to do something it couldn't do the day before. As before, there's just about room for three on the back seat, which features a reclining backrest. Out back, there's a 550-litre boot with conventionally-engined models, extendable to 1,600-litres with the 40:20:40-split backrest folded. The all-electric iX3 has a 510-litre boot; and the PHEV xDrive30e model's boot is 450-litres in size.

Pricing has risen a bit this time round, presumably to give the only slightly smaller BMW X1 SUV slightly more elbow room. The figures start at around £43,500 for the base xDrive20i and rise to just over £59,000 for the top variant in the mainstream range, the M40i model. The even faster X3 M Competition derivative costs a cool £85,000. As before, all variants come with xDrive 4WD and 8-speed auto transmission. If you want an electrified X3, the xDrive30e PHEV variant costs around £50,000; the all-electric iX3 costs from around £59,000. In basic specification, this revised X3 has a significantly improved range of standard equipment now that includes enhanced sports seats, with upholstery featuring smarter 'Sensatec' man made leather on base models. The X3 'M Sport' models feature Vernasca leather upholstery as standard. Automatic air conditioning with three-zone control is standard across the range, allowing separate temperature settings for the driver and front passenger as well as separate climate control at the rear. Whichever variant you select, it'll be easy to spend more than you budgeted or, thanks to a wider range of tempting options. Optional perforated leather climate seats will be popular, perhaps fitted out with active seat ventilation. Another option is a generously sized panoramic glass roof, while optional acoustic front side windows will complement the standard acoustic windscreen glazing to help create even lower noise levels in the cabin.

As you'd expect from a current BMW, emissions are low and fuel economy is excellent. To give you an idea of how far we've come, when the MK1 X3 was first launched in the UK in 2004, its 3.0-litre engine made 231bhp and emitted 293g/km of carbon dioxide. The benefit of a decade's engineering is evident in the fact that today's M40i flagship variant develops 360bhp and (under much stricter WLTP industry efficiency tests) emits just 204g/km, with a combined cycle fuel figure of up to 32.1mpg. Obviously, the mainstream derivatives do much better than that. With the diesel variants, well today's 286hp xDrive30d model will get up to 45.6mpg from a gallon of fuel and up to 160g/km of CO2, which is impressive for a six cylinder diesel SUV. Go for the entry-level X3 xDrive20d and you'll see up to 48.7mpg and emit up to 153g/km. You'll do much better with the electrified variants of course. The xDrive30e PHEV manages up to 141.2mpg and up to 43g/km of CO2. Charging from a 16A source takes 2.6 hours from 0-80%. The all-electric iX3 has a 285 miles WLTP-rated range and offers 150KW DC rapid charging for an 80% charge in 34 minutes.

BMW has had a lot to do with the rise in popularity of mid-sized premium SUVs, having sold getting on for two million of them since the X3 was first launched, pioneering this segment back in 2003. Rivals have grabbed the headlines since, but with the improved version of this third generation model, the Bavarians are out to redefine what a car of this kind should be. In many ways, this car does just that. Yes it's true that it doesn't offer much that's radically different to what we've seen before in this class, but everything it does do is so complete and polished that it's hard not to admire the end result. In summary, we think that buyers in this sector who can afford the asking price should find that this improved X3 adds up very nicely indeed. A vehicle this good ought to speak for itself. Try one and we think you'll find that it does.