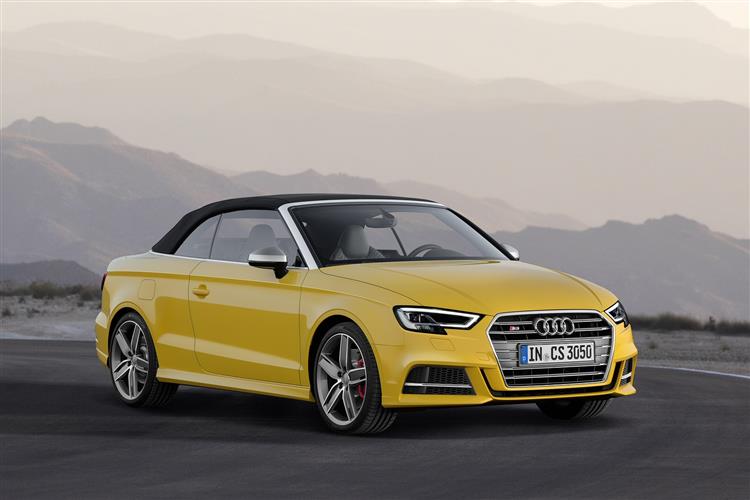 There are certain classes of car where the competition is white hot. If you were building a car to seriously challenge the Volkswagen Golf, the Ford Fiesta or the Porsche 911's market position, your vehicle would need to be hot stuff, with the sort of investment ploughed into its R&D that would keep a third-world dictator in diamond-encrusted loo seats for years. Then there are some vehicle sectors where mediocrity tends to rule. For altogether too long, the compact convertible sector has largely been populated with - and let's not be overly delicate here - outdated rubbish. This is the domain of fat-bottomed and wobbly coupe cabriolets, previous generation chop tops seeing out their dotage and ideas that should never have left the drawing board. It's where car manufacturers hide their models that look like dumpsters. Thankfully, it doesn't have to be so. Take Audi's much improved second generation A3 cabriolet, for instance. Here's a properly developed, well-proportioned car that drives well, now that (unlike its predecessor) it's been spun from a longer-wheelbase saloon. It's offered in upgraded tarmac-tearing S3 guise too. Is that a step too far for a market that's been perfectly happy with ambling ineptitude?

The idea of a genuinely quick compact convertible takes a bit of getting used to. Thanks to an improved 2.0 TFSI turbo engine that now puts out 300PS, the S3 Cabriolet smashes its way through 62mph in a mere 5.2 seconds and keeps going to an electronically limited 155mph. The seven-speed S tronic auto transmission you have to have is new, a replacement for the previous six-speed S tronic 'box. Its added ratio allows Audi to fit a lower first gear - which accounts as much as the increased power for the 0.3s improvement in the 0-62mph sprint time. Changes to the software controlling the Haldex multi-plate-clutch four-wheel drive system now allow it to send up to 100% of drive to the front or rear wheels, depending on the traction available. Audi claims to have programmed the system to provide a greater percentage of drive to the rear wheels during spirited driving. The idea is that this will provide the S3 with more neutral on-the-limit handling traits, with less of a tendency towards understeer and a more tail-happy character than previous model. Audi drive select is standard and incorporates the characteristics of the electronic accelerator, the boost of the progressive steering and the shift points of the transmission. The driver determines with the push of a button whether these systems operate in comfort, auto, dynamic, efficiency or individual mode. In individual mode, drivers can compose their own preferred profile.

Subtle styling changes made to this revised model include revised bumpers, redesigned headlamps with optional matrix LED operation, a wider grille and more heavily structured LED tail-lamps. Otherwise, things are much as before. The S3 Cabriolet looks for all the world like a slightly shrunken version of the old S4 drop top and that is certainly no bad thing. Compared with the Audi A3 Cabriolet, the body is 25 millimetres lower due to the S Sport chassis. You might also spot the S-specific single-frame grille and front bumper, aluminium-look exterior mirrors, pronounced side sills, LED tail lights and a redesigned rear bumper incorporating a platinum grey diffuser and cut-outs for the exhaust system's four oval tailpipes, which feature chrome tips. The interior is typically jewel-like, with beautiful detailing but a pared-back feel. The 'Virtual Cockpit' instrument display used in the TT and other pricier Audis is now available in this car as an option. This displays the most important driving-relevant information in high resolution on a 12.3-inch diagonal TFT screen. The driver can switch between two views by pressing the "View" button on the multifunction steering wheel. In addition, the menu structure that works the centre dash MMI infotainment screen has been redesigned and is now more intuitive. Otherwise, everything is pretty much as before, with classy materials and strong build quality. The upholstery is Nappa leather with S embossing and contrasting stitching. A special colour pigment on all leather trim prevents the seats from heating up too much in the sun. A leather multifunction sport steering wheel is standard with a flat-bottomed rim and shift paddles. The boot's carrying capacity amounts to 285-litres with the hood up and 245-litres with it down. You can even fold the rear seat backs forward to get longer items in.

Expect to pay somewhere in the region of £42,500 for the S3 Cabriolet and you shouldn't be too far off the mark. The roof is electrohydraulically operated and its weight is kept down by the use of magnesium, aluminium and high-strength steel components. It's padded with insulated foam to keep out noise and thermally protect the cabin and is available in three colours. It opens or closes in 18 seconds, even while driving at speeds up to 31mph. An active rollover system protects passengers in the event of an accident. Dual-zone electronic climate control is fitted as standard, as is MMI, a sophisticated infotainment system that's well worth taking the time to master. There's a slimline, power-retractable, seven-inch monitor and MMI touch integrated into the top of the rotary push button. The key option with this improved model is the clever 'Virtual Cockpit' system replacing the conventional instrument dials with an eye-catching 12.3-inch TFT display. But of course, there's much else to select from. As for infotainment, well Audi reckons that this improved S3 sets fresh standards here. An 'MMI radio plus' set-up with an electrically extending 7-inch diagonal monitor is standard, along with 'MMI navigation'. Go further and specify the 'MMI navigation plus with MMI touch in conjunction with the Audi connect' package (what a mouthful!) and you can have many online functions in your S3 at high speed via the super-fast LTE standard. They include, for example, navigation with Google Earth and Google Street View traffic information in real time, as well as practical information on parking, destinations, news or the weather. There's also a free 'Audi MMI connect' app that enables other services, such as online media streaming and transfer of a calendar from a smartphone to the MMI. Mobile phones with iOS and Android operating systems can now be connected with the car via the standard Audi smartphone interface.

Despite the aluminium body and the lightweight hood construction, quite a lot of beefing up has had to go into the S3 Cabriolet's chassis, which means that the kerb weight of the vehicle climbs from the saloon's laudable 1,430kg to a big-boned 1,620kg. That's the saloon plus two sixteen-stone passengers. Given that they both make 300PS, it's hard to see how they're both equally quick against the clock. They're certainly not equal when it comes to efficiency. The S3 Cabriolet's extra weight sees it return up to 33.2mpg on the WLTP combined cycle and up to 192g/km of WLTP-rated CO2 - significantly behind its 4-door showroom stablemate. Residual values are sure to be comparatively good, with the S3 Saloon S-tronic retaining 45 per cent of its value after three years and 36,000 miles. The Cabriolet shouldn't prove too far off that mark.

This S3 Cabriolet is a car close to my own heart as for a while, I ran an S4 convertible. For a very short while. I found I was averaging around 16mpg, the top rate tax was also putting a major dent in the budget and, after having scratched the V8 itch, I moved on to something a little more sensible. The S3 Cabriolet is the car I wished my S4 had been. It's just as quick, but halves the emissions and doubles the fuel economy. It looks just as good and while the engine will never have the charisma of 4.2-litres of loud V8, the torque curve clearly shows that the latest S3 will be quicker than the old S4 in real-world scenarios. No respect, I'm telling you. It's a testament to how much this car has improved that a soft top S3 now seems a wholly viable thing. Can you imagine an S3 Cabriolet based on the dumpy old hatch-based first generation A3 Cabriolet drop-top? No, me neither. Audi has clearly demonstrated that not all compact soft-tops are created equal.